At last the word is spoken. At last the thing is given a name. For a long time there was only mention of a pre-mafia situation (prosecutor Legras, Glavany report). With a hint of euphemism some are still talking today of a “pre-mafia situation” while, even worse, others deny the undeniable obviousness of mafia in Corsica. Besides “There is no such thing as the mafia anyway! So says the mafia itself!”.

At last the thing is given a name!
Corsicans were the first on social networks to have pointed out who
was behind the assassination of Massimu Susini. His personality and ethics and fights left no doubt as to who was behind his assassination. It was not a settlement account between rival gangs, it was a mafia-like crime.

Now the word is acknowledged, all that remains is giving it a proper definition. The mafia is no fantasy, and one should not have in mind geographic, historical or movie references to know if the mafia in Corsica is in line with the Sicilian model.

The prime characteristic of the mafia is being an occult power. A power whose ambition is to control the whole of society, and leave to the forefront mere puppets, whether they be aware of being manipulated or not. Its purpose is to spread into society the kind of governance it is already implementing in the businesses it is running.

It should not be assumed that the mafia boils down to violence, however cruel it may be. Its violence, the one that shows openly, is only one among the many sides of its evil practice. The mafia resorts to violence when it cannot do otherwise, and it could even be argued that this is evidence of weakness.

But what the mafia appreciates most is quietness and discretion. As an occult power, it hates being in the daylight.

Yet today it stands in the daylight. In the daylight of Massimu. But what did they kill Massimu for, as it is tantamount to an admission of weakness? The answer is that it had not gauged the impact of its crime. No one had expected the emotion and uprising that followed in Corsica after Massimu’s murder. Neither his family nor his friends.

The mafia is currently mutating in order to upgrade to the next stage of its activity. It is already an occult power in a certain number of sectors. It wants more. It wants the whole of the power.

How did we get to this point? How could such a dangerous threat develop in our own house? Criminality does exist in nearly all human societies. It is usually at the fringe of society, only marginal.

In Corsica this is no longer true.
In Corsica criminality is well-established before everyone’s eyes. To some it is a model. As for the mafia its ambition is to become the norm.

The gangs at war against one another to control the drug market and the slot machines market and which fight to get a grip on racketeering and consular institutions have understood they can have it all if they join forces.

Curiously enough, they reached such a level of power while the authorities representative of the French government, which is the only holder of legitimate violence, have at their disposal in Corsica huge intelligence resources and repressive means.
How could this danger, deadly for us all, come to consider that total power was within its reach?

There was no plan previously and mysteriously set up through a mystical ritual. Not at all!

They are just bunches of hooligans that started their criminal activities by appropriating a territory neglected by their elders (sometimes after killing them). Then these groups went on expanding according to the settlement accounts that took place between rival gangs, without encountering any significant resistance from public authorities. All the population could do was look on and suffer.

Those more or less powerful gangs managed to put an end to their confrontation by becoming allies. Joining forces enabled them to become more dangerous in Corsica than ever before. They now feel they are strong enough to lash out at the whole of the Corsican society and threaten it.

That was why it was also present, through “subcontracting”, in the Carghjesian area, devoid though it is of any tradition of gangsters or criminal activity.

The Carghjesian area also has no economic activity other than a handful of public services and a variety of small commercial businesses, more often than not seasonal ones. Nothing exceptional but still, by and large enough wealth to attract youngsters (some of them from Carghjesi itself) who do not intend to make a living from their work but rather capture a large portion of this wealth for their own benefit and that of their wretched accomplices.
It goes without saying they also need businesses to launder the money they get from drug trafficking.

The money collected is also used to ensure the loyalty of some very young people lured by the opportunity to make easy money and by the relative impunity ultimately enjoyed by those criminals. Massimu verbally and physically opposed such schemes. “He put his very skin at stake on the table”, and he was aware of it. Without changing his lifestyle, because he refused to yield an inch of ground to the hooligans.

Our local criminals felt they did not measure up to him and made up their minds to murder him. He knew it. And they are already planning other murders. To achieve this they turn to much more powerful gangs based in Ajaccio. Well-entrenched gangs established before everyone’s eyes, some of which belong to the city’s high society. They are the famous pinstripe-suited hooligans exposed by MP Colombani at the French National Assembly, namely white-collar delinquents.

It is a give and take process on a mutual criminal basis: “You help us kill Mr. So-and-so and we’ll help you get rid of the one of concern to you in Carghjesi”. “That way under our protection you’ll become Carghjesi’s little godfather.”

Massimu’s murder aimed at achieving two objectives: Clearing the ground for their predation activities and raising fear in order to foster them even more. No one will escape their influence unless we take action now. Those who think they can remain in the shelter of their villa unconcerned by these issues will understand soon, and probably too late, that no one will be left in peace unless they pay the mafia their share. It is merely a question of time.

The mafia aims at holding the occult power. The real power. Needless to say that the mafia is a bunch of hooligans (thieves, criminals and murderers) but it is also a proportion of the economic sphere (corrupt businessmen, cowards, stooges, interest acquaintances based on misappropriation of funds and swindle).

The mafia is also the result of corruption and cowardice of a part the political circles, eager to get their hands on the public works contracts, modify the Urban Local Plan and obtain illegal building permits. The mafia is not driven by ideology, its sole concern is power. Hence its capacity to adapt to any political party present in Corsica. All parties.

But the mafia’s components amount not to three but four. The fourth one, largely hidden from view, is part of the State apparatus: the police and certain services make use of the mafia while in return give the mafia a free hand in Corsica (see the letter from Bastia’s prosecutor calling for the police superintendent’s dismissal), some magistrates forget to lodge appeals, lose a certain number of files, release some defendants out of connivance or are led to miraculous verdicts of not guilty. An elected representative or a subservient representative of the State can be identified by his/her excessive reluctance to give the mafia a name. Because he/she knows!

The matter here is not one of folklore nor of stigmatization. Everyone agrees that we are going through unusual times, akin to times of infamy.

We must see things as they are, give them a name. So as to clearly identify the evil. Its origin and oppression mechanisms. We have to do so in order to develop a process of resistance within the people as well as tools in a position to destroy this evil before it destroys us.

This is why you are here. This is why they took Massimu’s life when he was 36 years old.

This murder shows that the mafia’s rooting process has gone one step further.
Henceforth the mafia takes it out on the Corsican society. On Corsican society at its best. On its youth, its honesty, its courage and its labour. The qualities and values representative of that ancient island people stand in the way of the mafia’will to expand. Corsicans have to be destroyed, killed, and replaced by a scared and submissive population. The mafia feeds on fear and servility.

Our response, your response, consists first of all in speaking publicly. In the second place there is this Collective we have set up and which will give voice to its members and probably beyond. Massimu Susini’s objection to seeing his village turned into a Mafia controlled territory has now become our mission.
We must also forge links with other people, other territories and other associations for the whole of Corsica to be freed from the mafia. Massimu’s awareness, his courage, action and memory are to be our guide and point of reference.

This Collective was formed in order to:

7. Hold the authorities accountable, locally or nationally.
8. Give voice to those subjected to pressure or victims of mafia
violence.
9. Associate in an action with the public prosecutor in the
proceedings involving the mafia. 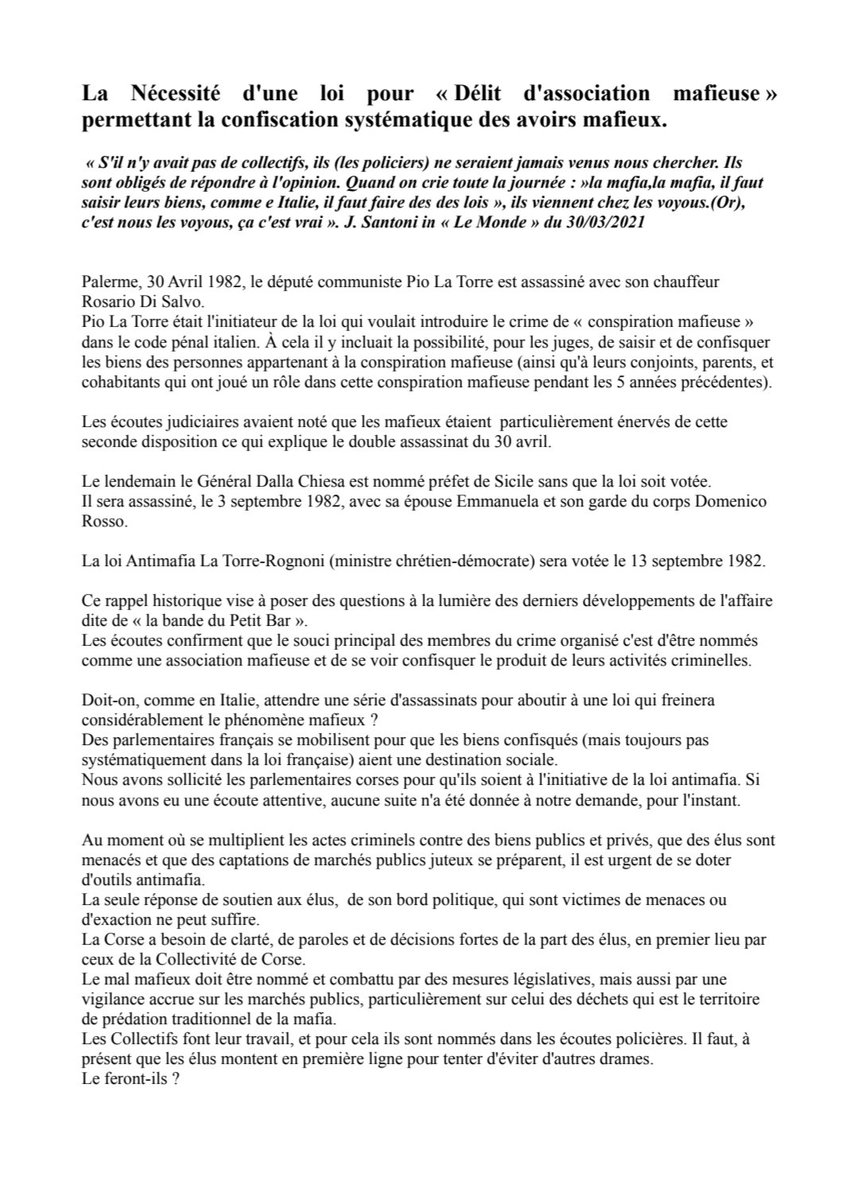 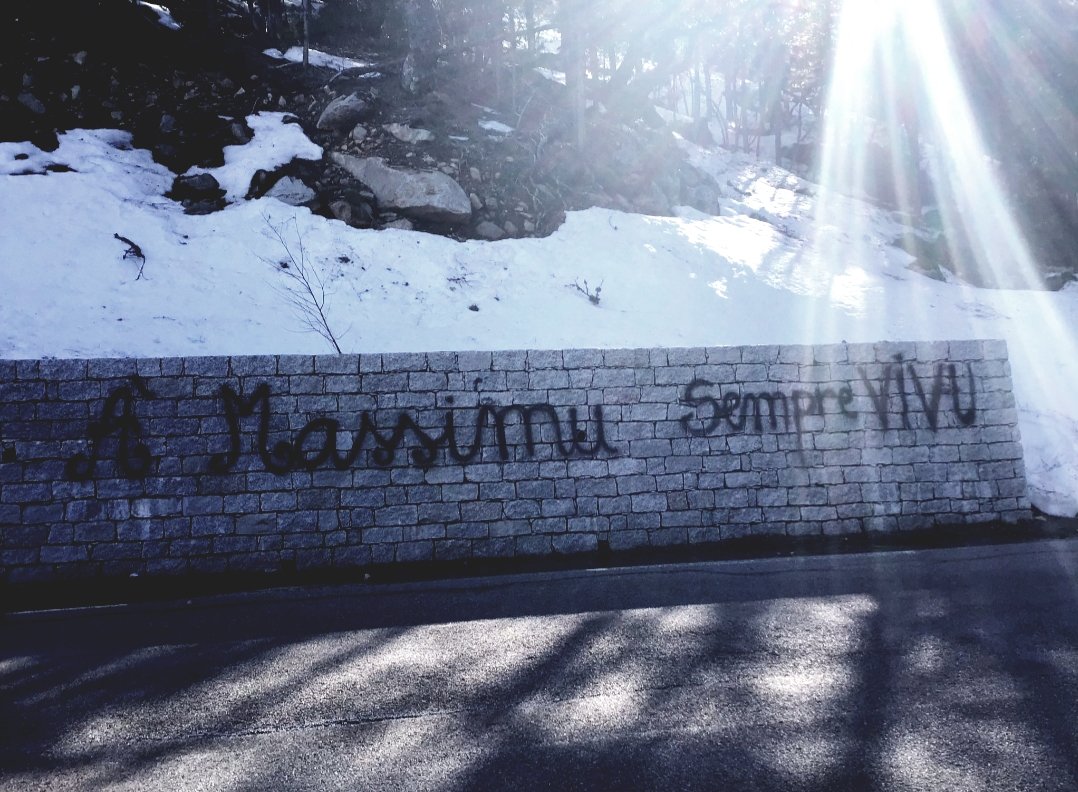 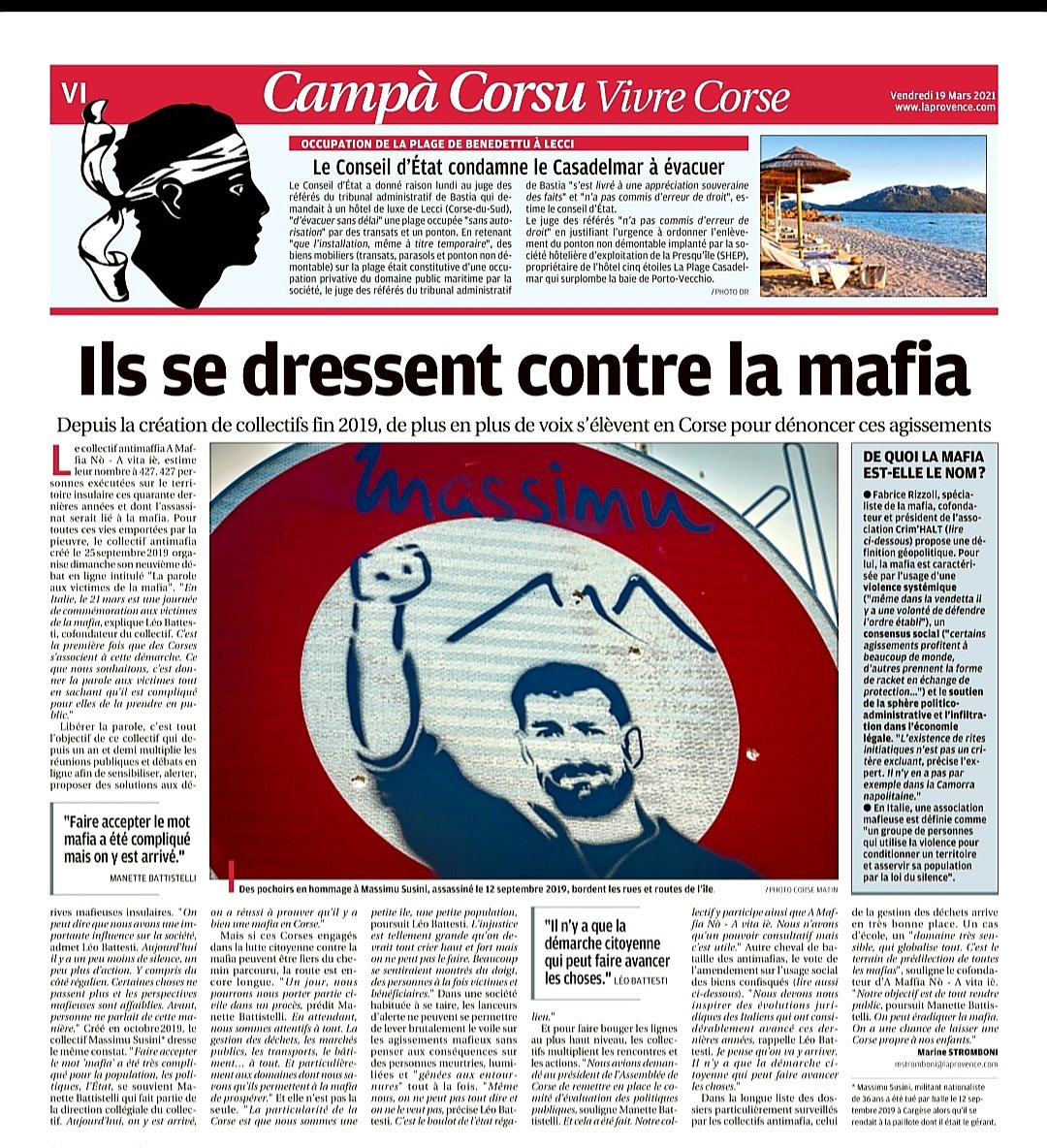